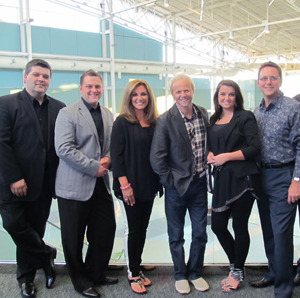 The Nelons & LeFevre Quartet Announce “An Evening In December” Christmas Tour Atlanta, GA – Popular recording artists, The Nelons and The LeFevre Quartet will join forces this Holiday Season to present An Evening In December” Christmas Tour. The Tour will be featured in select cities throughout the month of December, kicking off November 30, in Concord, VA. It will include stops in 12 cities and seven states, including Virginia, Tennessee, Ohio, South Carolina, Georgia, Arkansas and Mississippi. Joining The Nelons and The LeFevre Quartet will be special guest, Tim Duncan of Canton Junction, who formerly sang bass for Ernie Haase & Signature Sound. For three decades The Nelons have been bridging the traditional sounds of Southern Gospel with contemporary influences that inspires listeners of all ages. The group, who has enjoyed much success as a part of the prestigious Gaither Homecoming Tour and Video Series, continues to cross generational gaps, presenting rich harmonies that have been embraced by audiences from all walks of life. The musical ministry of The Nelons was born in the late 1970s from a name that has been synonomous with Gospel Music for nearly a century. In the 1920s, the original LeFevre Trio began traveling and singing. In the late 1950s, Rex Nelon joined the group and for the next 40 years, the Nelon/LeFevre combination proved to be a winning one. This December, the rich Nelon/LeFevre combination will be recreated as second and third generation Nelon, unite with second and third generation LeFevre to create a Christmas music spectacular that is sure to warm hearts and bring Christmas cheer to audiences who will be a part of An Evening In December. “We are so excited about this opportunity,” states Kelly Nelon Clark. “Christmas is my favorite time of the year, and I am really looking forward to the start of the Tour and the release of our new Christmas recording.” The Nelons’ new Christmas recording will release November 13 by New Day Distribution and Daywind Records, just before the Tour begins, and includes several original songs, as well as Christmas classics. “This is the first Christmas recording we’ve released in over a decade. We worked so hard on it, and we can’t wait to be able to share the songs with audiences who will join us for the Tour. We love Mike LeFevre and the LeFevre Quartet. They are like family to us, and we can’t wait to have the opportunity to be on stage with them. We’ll probably do quite a bit of laughing, maybe a little crying and definitely a lot of singing.” Mike LeFevre shares the excitement of Nelon. “We are honored to be a part of this special event,” he states. “It is going to be so much fun and we hope all our friends will join us for this special time, as we will make lots of new Christmas memories.”

Special note - Artists intereviews may be obtained by submitting request to writersink@att.net. 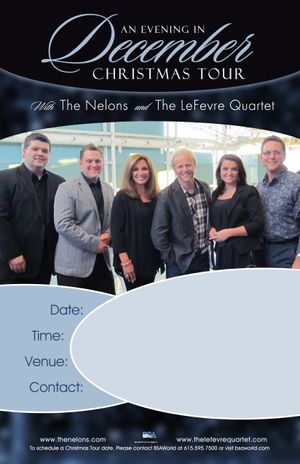